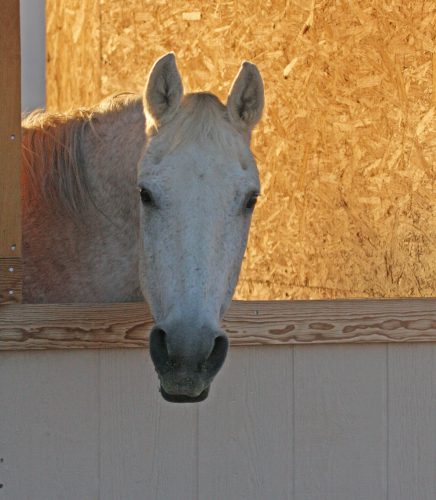 Ivory suffered a lifetime of abuse. Not all the details are known, but I do know that Ivory never had much of a chance. The first time I met Ivory was years ago when I was working with a vet at the time. We had an emergency call at the ranch where Ebony and Ivory were. The call was for Ivory. She was cut up from head to toe. The owners never said what cause her injuries, but we spent most of the day stitching her up along with two others.

That ranch had over twenty horses and the condition of the ranch was disgusting! All they cared about was breeding the hell out of these horses. They were reported several times, yet nothing was done. Over the years, the horses started disappearing one by one. The last two left were Ebony and Ivory.

When I received Ebony and Ivory there wasn’t much life left. Both were 24 years old with severe arthritis; Ivory’s was due to injuries and Ebony’s was due to partial hip sockets. Of course that didn’t stop these people from using them as brood-mares and running them into the ground.

Since I’ve had these two, I watched them slowly come back to life, watched them build a trust for me, run, play and just enjoy what they have. But the bond, the bond they have for each other is the most amazing thing I have ever seen.

This never gets any easier. Once again I have to say goodbye to two more beautiful animals that have touched my heart. Ebony and Ivory, two horses with an amazing bond and compassion for each other. Being together all of their lives, living in horrific conditions and suffering severe abuse. They were the only two survivors of 26 other horses who died of illness, beatings, and just plain neglect.

Granted both had good days and bad, but neither was sick at the same time. When one was, the other always stood strong by their side. Neither would eat unless the other one was able.

This past couple of weeks, I have watched these two slowly get weaker, both were starting to fail and both pretty much let me know it was time.