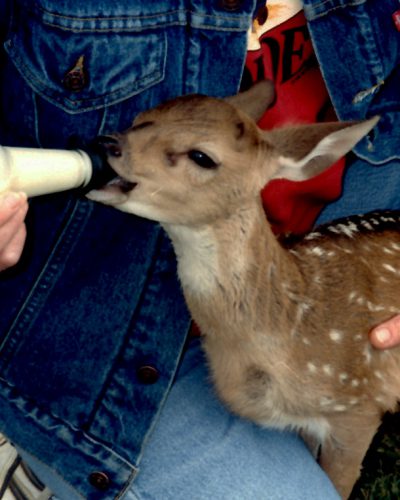 A neighbor who lived across the valley from me bred and raised Axis deer. Zack was born in a middle of a winter storm just a couple hours before this man brought him to me. He said he didn’t have time to take care of him and the mother had died about a half hour ago.

Wet, half frozen and lethargic, I took him in. First thing, I put him on a heating pad and dried him with blow dryer. Zack started to perk up!

The dogs were fascinated with him. Molly and Rose, only a year old at the time, were already showing their motherly instincts, keeping him clean and letting me know when he was hungry. He in turn would follow them and do everything the dogs did. Even go outside to go potty!

After three weeks of Zack running and playing with the dogs, he started to lose his appetite. I took him to the vet, but no one could find anything wrong. Five days later, Zack passed away.

It turns out Zack died of a Sepsis infection. He never had a chance to nurse from the mother, so he had no antibodies. It never occurred to me or the vet. A lesson I’ll never forget…

Zack only lived for 30 days.