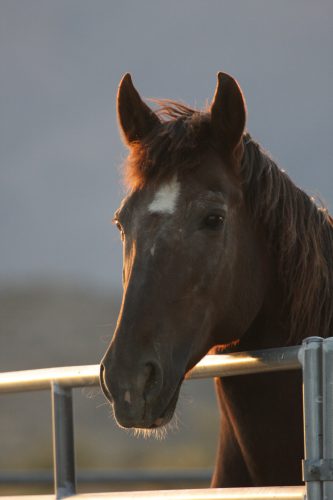 LaKota, was a part of the July 1996 Bureau of Land Management round-up of wild horses in Nevada. The horses were rounded up to be sold at auction. If they were not healthy, a worse fate awaited them. Annie and her friend stepped in to help bottle feed and care for over 175 foals that had been brought in. They were all between only one and three days old. The babies had to be bottle-fed around the clock for the first couple weeks of their lives. Then they learned to drink the out of a trough.

LaKota was one of the sickest foals there. Annie could not bear the thought of a young, defenseless, and ill baby horse being euthanized, so she adopted her.

Kota had severe diarrhea, a huge umbilical hernia, and an ulcerated eye – injuries that likely came from being birthed on the run during the round-up. We don’t know if she hit her eye on a rock or exactly what happened. We do know that she arrived without her mama, not having had the chance to nurse and get the immunity that comes with the mother’s milk.

It took 6 months for the diarrhea to clear up.  She was gaining hardly any weight during that time.  The hernia could not be repaired because she was not strong enough to undergo the operation. Annie took a year of dedicated effort to manually press the hernia back up into the correct position, three times a day, so that the muscles and tissues could gradually grow around it, protecting it and keeping it in its proper place. Finally, Kota began to grow and was able to play and enjoy life.

When Kota was about 3 years old she trotted a few steps one day, then couldn’t put weight on her leg. It turns out she had broken the second digit in her leg. Often, horses are euthanized right away if their leg is broken. But Annie wouldn’t hear of it. Kota received the operation to put a screw in to repair the leg. The vet told Annie that if Kota was able to accept the cast then she could have 5 good years before they might have to freeze the joint or before the onset of ring bone. Kota did accept the cast! After the cast came off, she needed a special shoe with a bar to support the hoof and an adjustment every other week to gradually lower the bar until the hoof could be in its normal position. But an error on the part of the farrier caused the screw to break. After 3 months of recovery, Kota was back to square one. Annie took matters into her own hands at that point and worked intensively to help her heal – leg wraps 12 hours on then 12 hours off, leg soaks three times a day, every day! And a long regime of anti-inflammatories. It took a whole year of this TLC for Kota to recover.

August 2016, I had to say goodbye to Kota. Six years prior to Kota’s passing the ranch was inundated with open range cows. The cows would show up every night and push up against her corral panels. Kota, in return, would charge the cows and slam her front hooves on the ground, trying to run them off. After six years of this, it took it’s toll. One day she could no longer pick up her feet. Kota had gotten a sepsis infection in the coffin bone and passed away four days later.

Kota was with us a little over twenty years.